As promised, a photo of the ridge for Chalons, taken on some 3′ x 2′ boards for scale. As you can see, it will stretch past the centre line of the table and dominate the northern half of the battlefield. Controlling it will, I think, be critical to the flow of the battle. 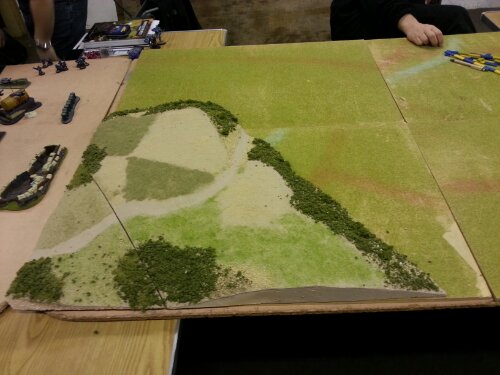 There will be a total of nine commanders involved in the battle, divided between the two sides.

The Romans and their allies:

The Huns and their subjects:

It seems strange to refer to this as the battle of Chalons now, since we are re-fighting it on a battlefield outside Troyes, but this is the more detailed view of the battlefield that we will be fighting on, i.e. the chunk of it that fits on a 8′ x 4′ wargaming table, which (by my calculations) comes to around 4 km by 2 km.

As can be seen, the main feature is the ridge on the north side. The next post will show what this is currently looking like.

This year’s battle for the Society of Ancients Battle Day is the Battle of the Catalunian Fields, aka the Battle of Chalons, in 453AD. It is regarded as a pivotal battle of late antiquity, stopping Attila’s Huns in their tracks and saving western Europe from them, although actually it doesn’t seem to have really had such an effect, and western Europe was saved more by his marital over-exertion and the inability of his successors to control their German vassals.

Anyway, next post will deal with the two armies. This one will be about where it was fought. It is one of those battles where we just have a few fragmentary accounts of what is going on, all of which seem rather unreliable. The primary source is Jordanes, a Romanized Goth writing in the 6th century. The consensus seems to be that Attila, on a up-til-then successful plundering expedition through Gaul, was besieging Orleans. Aetius, the Magister Militum of the West, came north from Ravenna, assumed command of the relic field army of Gaul and forged an alliance between the various Germanic tribes that had carved up most of Gaul between them by this stage, and who therefore actually had more to lose to Attila than Aetius did.

This combined army then moved on Orleans, forcing Attila to raise the siege. Attila then appears to start retreating back towards the Rhine, presumably happy with the plunder gathered so far and unwilling to risk his men in an unnecessary battle. At some point along this line of retreat, Aetius catches him and forces him to give battle. We are told that the site of the battle is somewhere near Chalons, and the only two physical details we are given about the battle are that there is an important ridge that is fought over at the beginning of the battle, and that after the battle the streams ran red with blood. Given that these streams are not mentioned during the battle, they cannot be one of the major rivers that cross the area though.

Most authorities place the site of the battle on the open plain between Troyes (on the Seine) and Chalons (on the Marne). Retreating from Orleans (on the Loire) to the Rhine involves crossing both of these rivers at some point. I think we can probably also assume that Attila, probably encumbered by considerable baggage, used the Roman road network to move his army around. The obvious initial route is Orleans-Sens-Troyes. At this point you reach the Seine which is the first significant obstacle and which is going to slow down your army as you cross it, probably by a single bridge. If Aetius is hard behind Attila then this is the first place that he can catch up, and Attila might end up in the awkward position of being caught with half his army on the far side of the river and out of action.

This line of enquiry was sparked by an article that Duncan found in an old French journal that outlined a possible battlefield to the west of Troyes. The road from Sens passes through a range of hills before debouching onto a plain in front of Troyes. On the north side of the plain, there is a prominent ridge, with the village of Montgueux on top of it. This seems to be a prime candidate for Jordanes’ ridge. There is also a small stream that appears to rise in the plain, near the modern village of Torvilliers, which would be the stream of blood. A snapshot of the battlefield from Google maps, annotated by me, is shown below, with the potential site for the battle that we have decided to use.

For a battle that we know nothing about, some stuff is at last starting to come out of the woodwork about Chalons ( a lot of it on the SoA forum page http://soa.org.uk/sm/index.php?topic=217.0).
Firstly there is Jordanes, who tells us who was fighting on each side and about this enigmatic ridge. His numbers are obviously incredible though, and that’s a problem when you are trying to wargame a battle using rules that have a troop ratio.
Second is a panegyric of Sidonius that tells us that Aetius came north with no milites, only auxiliaries. Some interpret that as no legions, just auxilia; others more broadly as being no regular Roman troops, just mercenaries or household.
Thirdly, we have the record that the Vandals (and some Alans) when they crossed into Africa under Gaeseric were counted and numbered 80,000 people in total, so we could guess than only 16-20,000 of those would be men capable of fighting. This is accepted as a reasonable figure for a Germanic host of the Volkswanderung period.
Fourth, Duncan Head has mentioned a argument of Lindner that Hungary at the time of Attila couldn’t have supported the horses for more than 15,000 Hunnic cavalry.

The battle for next year’s Battle Day (13th April 2013) has been announced as Chalons (451AD) – the classic Huns vs Romans battle if it wasn’t that the Hunnic army was probably mainly Ostrogothic and the Roman army we certainly mainly Visigothic.

And probably is the big word here. We know that there were lots of Goths involved. And that there was a ridge that was key to the battle. We don’t know where the ridge was, relative to the Goths, or indeed where the Goths were, relative to the ridge. We do know that the battle started late in the day and went on into the night and that there was a fair bit of bed swapping going on – a Visigothic prince tried to kip down in the Hunnic camp but was kicked out, and Aetius spent the night in the Visigothic camp (he wasn’t kicked out).

The good thing is that I have just started on a Late Imperial Roman army; the bad thing is that there were very few Romans in the battle, although some of the local contingents sound like they might have been former garrisons that have become semi-independent principalities, so there might be a bunch of Bd(I) and Ax(O) pseudocomitatenses.

All this means that I need to paint more Gothic cavalry and infantry, which is good because I wanted to do that anyway. So far I think that I will try and use a mixture of Khurasan, Legio Heroica and Old Glory for the cavalry and Legio Heroica (when they come out), Buaeda and Old Glory for the infantry. The Romans are all Legio Heroica who are nicely sculpted, if rather static and chunky. But there is a lot of head variation and they have open hands, which I like. For regulars they look formed and drilled without being uniform.